We have to get in early to write our end of year College magazine article. I like what we’ve accomplished at St James this year. Here’s my article. I’ll add in some links to make it more relevant.

The college production War of the Worlds, although not being specifically part of the Technology department, had sets built in Woodwork, moving gears powered by the Year 7 Engineering and Design course and animations coming out of Year 8 DigiTech.

The first year of the Breakfast Club before school on Tuesdays and Thursdays was incredibly successful and the new Apprentice program being run through the Wednesday program was a huge win. And again, in the background, the Year 9 Digital Technologies course was working to digitise the order system, ready for 2018.

STEAM was the buzzword for 2017 and St James College demonstrated that we are well and truly STEAM-powered (I am never going to get over that pun).

This is also the first year that the Year 10 Game Design class took to the skies, programming drones in preparation for our inevitable takeover of East Bentleigh.

Paige Mitchell joined me in Engineering and Design this year. She took to the robots like a mechanical (and waterproof) duck to water. Her class programmed the NXT robots, built some spectacular robotic dragsters and evaluated the St James Spheros. They were so excited about the project that a number of them brought their own in. Here’s Paige:

The Sphero is a small spherical robot that is capable of rolling around on different surfaces and controlled by a tablet. Over the course of the semesters, students have had the opportunity to have a go at using the Sphero’s. The students were asked to design an obstacle course in the classroom for the Sphero to travel around, have a go at using the Sphero and controlling it via their I-pads, we then created a competition to see who could control their robot the best around the course. Students were amazed at how fast the Sphero could travel and how hard it was to control.

Playing with the Sphero robots was fun and exciting, sometimes it’s quite hard to control them because of invert controls but other than that it was a blast – Oliver 7B

The Sphero’s are a very fun and can be used for many things such as doing jumps and chasing people with. They are also very easy to control. They can do lots of tricks such as doing little hops and touchdown dances -Lachie 7B

Sphero’s are great robots for teaching. They are really interesting to use and have lots of features such as you can change the speed it travels, the colour of the robot and you can do jumps. I learnt a lot from using them and really enjoyed the lesson – Kristian 7B

Digital Technologies this year was broken into 3D Design/animation and Game Making. There are some incredibly inventive students in Year 8. After creating a basic Catch the Clown game and a more complex Maze game, they finished the semester by preparing a game for the STEM Games Challenge. I assessed them on their preparations and a demo version of their game, but one group decided to complete their game and enter it into the competition, after working on it over the holidays and well into Term 3, so well done to Rad, Ed, Richard and Christian.

The students in second semester are entering their major projects into the ACMI Stream It Challenge. I’m writing this well before the due date, so fingers crossed that they won something. 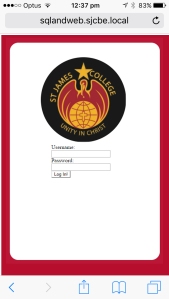 The Year 9s have been trialling a brand new subject called Digital Technologies and Web Design. The idea behind the subject was to create a web-based application that allowed students and staff at St James College to order food from the canteen online. The students had to learn how to use HTML, CSS and SQL, along with the FTP server to transfer everything onto the website.

First semester was a bit hectic, with technology teething problems being solved by the esteemed Matthew Marcos as they appeared. Second semester ran a lot smoother. We expanded our client base to include the Wednesday Program and the Breakfast Club and, at the time of writing, five budding web development companies are busily interviewing clients and putting together mocked up screen layouts. Once they’re familiar with SQL, they’ll program the back end and get some testers in to make it work.

Mr Bell, sick of me stealing his best ideas for my Year 8 class, has again improved the Year 10 Game Design subject. Students are creating games completely using code within GameMaker. There are some very impressive games coming together at the time of writing.

The standout success for the semester was his drone programming unit. The students explored why drones are being used, before jumping in and programming one of the College drones to perform a task. It’s an excellent way to demonstrate sequencing in a real environment.

Technology is expanding. Digital Technologies are spreading out like a computer virus through the school. Maths is taking on programming as part of the curriculum. The whole school will be filled with STEAM (there I go again). We’re running a DigiTech Projects course at Year 10 – an open-ended subject where the students choose the project and I focus on teaching them the skills to think through the problem like an IT Professional. Also, God willing, the Certificate II in Creative Industries will run again next year, giving students access to VCE Units 1 and 2 at Year 10.

The Come and See program this semester involved Food Technology, so my little family of subjects will grow, and a new generation of boys will go to university knowing how to do more than cook toast and boil eggs. Home Ec saved my life in High School. I still have my copy of Cookery the Australian Way.

And Materials Technology is an article in itself, so I’ll let Barry and David tell you about the triumphs carved in wood in 2018.